With the advancement of World Wide Web (WWW), people around the globe are demanding various types of services by using the internet. People have revealed that by using internet services they achieve their objectives easily and efficiently. People use different communication technology and networks for information accessing storing and disseminating Out of this latest developed technology one most used one is social media. If we consider the recent condition (Corona pandemic) of the past two year the we will definitely able to identify the valuable benefits of social media and its impact on students, farmers, government, researchers, etc. The questions like how the people managed their responsibilities? How they performed their duties? How the students give up their problems? etc., can be answered by analyzing the social media and internet.

Social media is generally used as a vast term for all web-based technologies and it incorporated with the features of web 2.0 to provide various platforms like websites and applications that support users in creating and sharing content, which is called social media tools. Social media tools are of various types according to their work and functions, some of them are extremely useful for educational purposes (Wankel, 2009). Like:

Social book-marking tools: This allows the users for bookmarking websites to easily locate the resources and share them with friends later. Example: Delicious, Diigo, Connotea.

Social news tools: These are a web-based platform which allows users to post news, current event among interested people of a common area. Example: Digg.

Hamade, (2013) conducted research entitled as “Perception and use of social networking sites among university students” where the author analysed the use of social media on a descriptive way (Hamade, 2013). Author used questionnaire method for collection of data where he designed five major sections and distributed among students and research scholars. Out of the 300 participants there are 140 (47%) male and 160 (53%) female respondents. According to his first analysis he found that Twitter was the most used SNS then Facebook which was the second highest in number and followed by Flicker, Myspace which were 7% and 2% respectively. According to viewing and posting of SNS there were 181 respondents view Many times a day which was 60% of the total respondents and 101 post many times a day which was 33% of the respondents. There were only 21 respondents who view SNS once in a week and 45 of the respondents who post once in a week in the SNS. Research conducted by Ruleman, (2012) stated about the use of SNS among the students as well as with comparison with the faculty.

According to the first statement (Use of technology while studying/researching) of the study there were highest number of faculty who uses social media at the age between 45-60 years and with comparison respondents who used highest at the age between 20-22 years (Ruleman, 2012).

In an international conference (Buhari, Gambo, & Bashir, 2014) presented a paper known as “Use of Social Media among Students of Nigerian Polytechnic” where they highlighted the use of social media and its impacts toward the students (Buhari, Gambo, & Bashir, 2014). According to the research question on that is the reason behind using the social media there were highest mean score (4.4) of the statement that is “Students of Nigerian Polytechnic use Social Media to connect, interact chat with friends” and followed by 4.3 mean score on the use of social media on sharing of information. Then analysed the frequency of use of social media where they found that students used social media more than five hours per day with the highest mean value 4.6. As per the perception towards use of social media there were highest number of respondents replied that there was positive perception towards the use of social media with the mean value 4.2. Social media are more widely used for the ease to use purpose (Wiid, Michael, & Corinne, 2014). As per Wiid, Michael, & Corinne, 2014 in his research found that Facebook is most widely uses SNS by social media and Pinterest has very least use (Mushtaq, & Abdelmadjid, 2018). They also found that most of the student uses social media in between 0-5 hours per week. Studies also found the various attributes about the social media and their importance (Dewing, 2010). The major purpose of using social media are e-mail, instant messaging, wiki reading, sharing documents and so on as founded common in many research (Hrastinski, & Naghmeh, 2012). On the other hand social media uses are depends on the requirement and form of communication, there are no direct relationship between social media addiction and life style (Hawi & Maya, 2017). Social media has specific impact to tourism and travel. Research conducted by (Ráthonyi, 2013) highlighted the specific affects toward travel and tourism (Rathonyi, 2013). Instagram and youtube have a major impact on school going students as found by (Martin, et al., 2018). They focused various objectives of using social media by the school students and found majority (127) students uses social media to earn about other people’s/friends’ lives, what they are doing, and what is new with them.

Among the college students they use social media for the purposes of sharing pictures, videos and other entertainment related materials, the uses were very less frequently to develop their professional networks (Knight-McCord, et al., 2016). College students use these networks 1- 5 hours each day and more on weekends. Social media has a positive impact on the political participation among the students found by the authors (Ahmad, Alvi, & Muhammad, 2019).

More students use social media for enhancing their political carrier. Again in another research found that respondents use online media for YouTube, face book, Instagram majorly as per (Al-Deen & John, 2011).

Objectives of the study

The research has been conducted to satisfy the following objectives;

• To know the use of social media for using institution library.

• To identify the types of services used in their respective institution library by using social media.

• To make a comparison on the basis of different variables between the two central universities.

• To analyse the pattern of using social media among the two central universities.

• To identify the purpose of using social media.

• To identify the esteem need of using social media.

There was total 80 (100%) online close ended questionnaire had sent to both the universities together and the chosen sampling method was snow ball sampling. All the samples are the on-going students of the respected departments (Department of Library and Information Science) of the selected universities. Out of the total there were 45(56.25%) questionnaires came back which are considered to be usable in this research. As described in Table 1 the majority of the respondents 16 (80%) of MZU belong to MLIS (Master in Library and Information Science) and the majority of respondents 11 (55%) in NEHU are PhD students. (Figure 1) describes the response rate of both the universities where the MZU will come in rank 1. 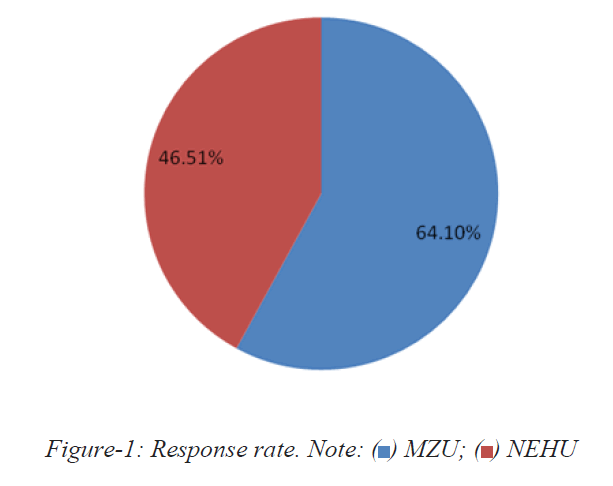 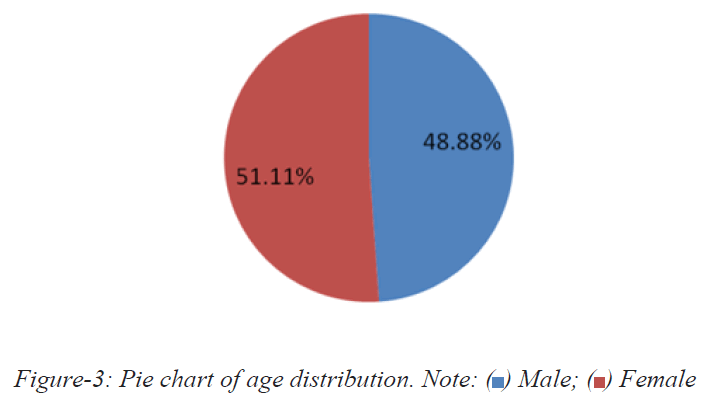 Uses and awareness of social media

To know how many of the students were using and how many were aware about the social media, the data has been analysed and represented in Table 3. In a general sense we can say most of the students (95%) were aware and using social media for their academic and nonacademic activities. By comparing result, it was found that students of MZU which were 25 (100%) were more aware than the students of NEHU which were 18 (90%) out of the total respondents in each university separately. There were 2 (10%) number of students from NEHU said that they may be aware about the social media. At last, a decision was taken to decide whether these two universities were using social media or not where, result shown that yes, both universities students are using social media. Here decision Yes= means 50 % or more than 50 % were using and No= means below 50%.

Use of social media for institution’s library

As per the analysis done in Table 4, there majority of respondents said they are using social media for using their institutional library services and products. According to the university wise data MZU is the highest use of media technology with the mean value 1.56 and after that NEHU with the mean value 1.50. 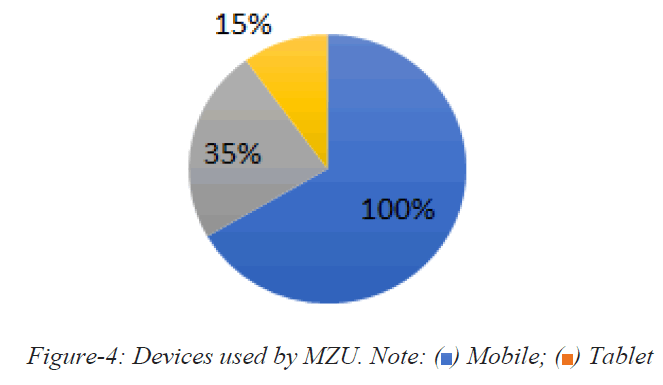 In this section author discussed about the purpose of using social media with regard to institutional library. In MZU majority of respondents that is 22 (88%) said that they are using social media ‘For contacting library staff’, followed by 16 (64%) ‘To access library services and products’, 14 (56%) said ‘To know about the library services and products’,12 (48%) said ‘For using dtabases’8 (32%) said for ‘To know about library’ and only 2 (8%) replied that ‘For using online journals.

Uses of social media for SNS 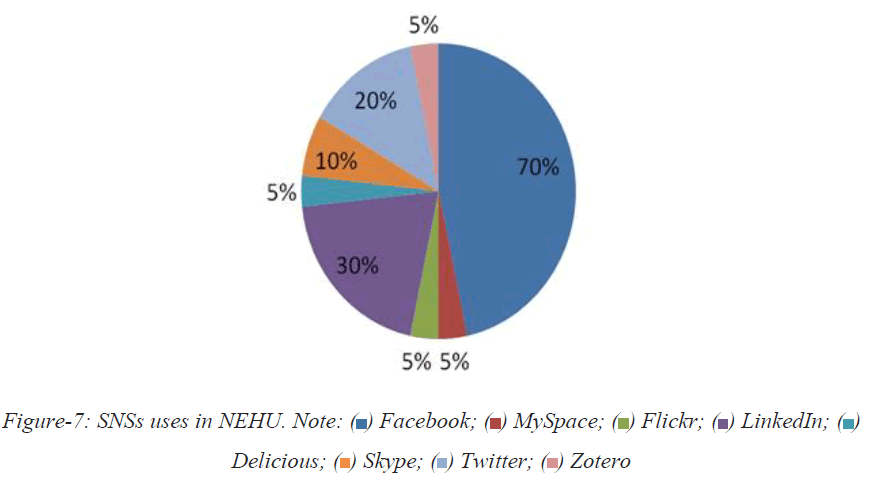 Positive and negative impact of social media towards students

It is evident from the above study, that social media in coming days shall play an important role in enhancing the learning opportunities of students and scholars. Due to its advantages of sharing and disseminating information around the world, the academic institution needs to encourage and support this advancement of technology in the greater interest of academic and research community. The society act as a divergent factor for mobilising the impact of social media may be its positive impact or may be towards the negative. Various orientation programmes should be taken in consideration by the libraries as well as the organisation to improve the positive impact of the social media among the students and researchers. Again, as time is the super factor of using social media, the users of social media need to focus the time management. Majority of the research found that students use most of the time out of a day for using social media. As the research found that Facebook and what’s App were the major SNSs for using social media so, every organisation should keep focus on theses while marketing any service or any products.

Copyright: This is an open access article distributed under the terms of the Creative Commons Attribution License, which permits unrestricted use, distribution, and reproduction in any medium, provided the original work is properly cited.

Authors can contribute papers on

What is Your ORCID

Register for the persistent digital identifier that distinguishes you from every other researcher. Cite This For Me

International Journal of Library and Information Studies is licensed under a Creative Commons Attribution-NoDerivs 3.0 Unported License.
Copyright © 2022 All Rights Reserved